The easiest of the Alpine resorts to get to by road, rail and air

(For information on how to get to the resorts from within Switzerland go here.)

If you are concerned about the ecological impact of your winter sports holiday, you will be interested to know that a typical trip to Davos from London will generate 17kg, 127kg and 116kg of CO2 emissions respectively by train, car and plane (Source: EcoPassenger). CO2 is a gas that contributes to global warming and which is slowly causing more and more winter sports resorts to become unviable. In other words, and by other measures too, the train is the most ecological means of transport for a winter sports holiday. By far. 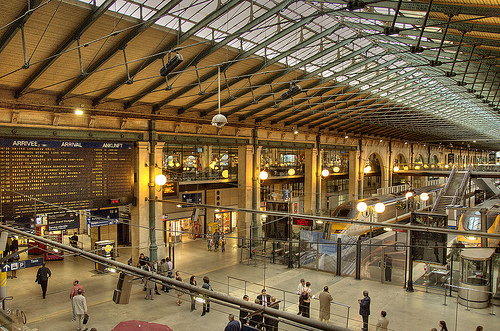 There are a number of choices for getting to Switzerland by train, most of them will require you to take the Eurostar service from either London or Ashford. Your likely choice is to change in Paris but Brussels is also an option and soon Cologne will be too. TGV Lyria trains are also now running seasonal trains from Lille to Geneva four days a week and to Vallorbe, Aigle, Martigny, Sierre, Visp and Brig on Saturdays, both connecting with the Eurostar service. If you want to make a break of it in the Netherlands too, there is a fabulous overnight service, the City Nightline, from Amsterdam and Utrecht to Basel and Zürich.

If you change in Paris you will need to transfer across the city from the Gare du Nord to either Gare de L'Est or Gare de Lyon. For Gare de Lyon take the RER line D from platform 44 for two stops. For Gare de L'Est there is a 10 minute walk from Gare du Nord. Alternatively you can transfer to both using the Paris Metro. From Paris you can take a TGV to either Geneva (for western Valais and Vaud), Basel (for resorts in the Bernese Oberland, eastern Valais and the central Swiss Alps) or, on the same train, Zurich (for resorts in the eastern Swiss Alps). You can then transfer on to your final destination via the excellent and reliable local Swiss Railways. TGV Lyria also run a seasonal service from Gare de Lyon to Montreux, Aigle, Martigny, Sion, Sierre, Leuk, Visp and Brig. So now it is entirely feasible to have breakfast in London St Pancras and dinner in Wengen, Davos, Zermatt or Verbier - or a choice of dozens of other resorts - with total journey times generally around 10 or 11 hours.

Eurostar links up with the TGV Lyria service from Lille to Valais which runs every Saturday during the ski season. The train starts early from London St Pancras, stops at Ashford, then switches at Lille to a TGV before the train makes four stops in Valais later the same day, in plenty of time to transfer to nearby resorts. From Martigny, Verbier is less than an hour away by train whilst from Aigle, Champery in the Portes du Soleil, Villars, Leysin and Les Diablerets all less than an hour away. Saas-Fee is less than an hour and Zermatt is almost exactly an hour from Visp. Brig gives access to the outstanding Aletsch Arena, with the resorts at Riederalp and Bettmeralp only 45 minutes away. Return fares start from £189. For more details visit Eurostar or call them on +44 8432 186186.

There are numerous deals for using public transport in Switzerland. There are a number of passes and a transfer ticket that are only available before you come to Switzerland for travel within the country - details here. Probably the best value once you are in Switzerland is the Snow'n'Rail deal which gives you around a 20% discount on rail travel and lift pass. Details are listed on participating resorts at this site or here. In general, trains and buses in Switzerland have facilites to carry winter sports equipment. If you visit Zurich main train station early on a weekend morning, you get the feeling that the whole world is taking a train to the slopes - fortunately, with so many destinations to choose from, those crowds rarely translate into standing room only or lift queues.

Our companion web site, Snow and Rail, lists resorts in other countries you can get to by train alone.

Some airlines charge extra for ski gear - policy varies so check with the airlines. The only airline that consistently permits you to take winter sports equipment for free is Swiss. If you are not flying Swiss Airways (or even if you are) you may want to consider a service provided by the Swiss Railways to take all your baggage from any airport to most resorts at a modest fee. Many hotels will even pick it up for you, and deliver it to your room. How's that for service! Follow this link for details.

Public transport also usually provides the best way to transfer from your airport to your resort - taxis in Switzerland are not cheap, and the public transport is highly efficient. There are railway stations actually in Geneva and Zurich airports, but the bus transfer from Basel airport to the railway station is a doddle too - although remember to choose the Swiss, and not the French, exit!

If you drive to Switzerland do remember you will need a carnet to drive on the Swiss motorways - they are available at the border or at service stations ahead of the border, will set you back 40 SFr and are valid for a year.

It is not mandatory to have winter tyres in Winter in Switzerland, but it is highly recommended. In neighbouring regions of adjacent countries it is compulsory, although I freely admit I do not have winter tyres and drive to several resorts every season, depending on the road conditions. In some high altitude resorts you may also need snow chains, particularly on small, local roads. You must always drive on headlights in Switzerland, even during daylight hours. There are few speed cameras around, but the fines can be hefty for driving infractions.

See the Getting About page for more details on using public transport and driving in Switzerland.

I won't list all the travel agencies that provide winter packages to Switzerland - pretty much all of the operators do, although the range of resorts is often limited to the usual suspects of Davos/Klosters, Jungfrau, Saas-Fee, Verbier and Zermatt. Great though these resorts are, Switzerland boasts many less well-known gems. The Getting About page gives drive times to most resorts, although bear in mind transfer times will be longer if your drop-off isn't first. However, one of the best things about Switzerland is how easy it is to tailor your own ski holiday, booking transport and accommodation independently and potentially visiting several world class ski resorts in one holiday. Familiarising yourself with this web site should make it a doddle, but feel free to contact me via the contact link at the bottom of the page if you need advice.