What to Expect in Switzerland 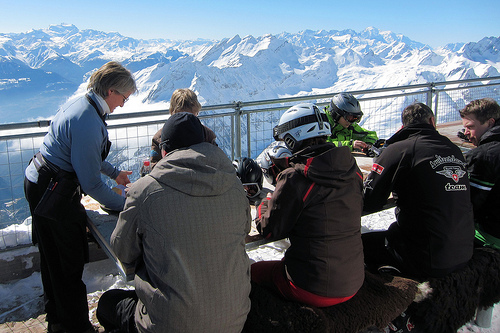 The Swiss are obsessive about what they term "Swiss quality". Hoteliers offer uniformly high standards, which means even hostels provide facilities many would expect of in a three-star hotel. Discounts are rare, even with a strong Swiss pound, but bargains are to be found by thinking like a Swiss would - for all the country's apparent expense, the Swiss are devoted tourists in their own country, and since they generally earn little more than the average European they have learnt how to navigate the country on a budget. The Swiss will often picnic for lunch, taking food away from the breakfast table or buying it in Migros or Co-op supermarkets. They will stay in hostels, Interhome self-catering chalets, or REKA holiday camps. They often have a favourite, low-cost resort they will visit every year, and you will probably never have even heard of it. Drinking on the street is rarely frowned on, so buying a few beers or wine at Co-op or Denner to drink in the village square or on the train is fine provided you are not rowdy. it is always a delight to enjoy mountain restaurants at lunchtimes, so the frugal-minded will check out the day's special or stick to a bowl of soup and grab some bread to soak it up. Incidentally the Swiss have lunch at 12pm - turn up late or early to avoid queues and to find a table.

The Swiss Railways are every bit as reliable as the country's famous timepieces. And it is not just the railways. Switzerland quite simply has the best transport infrastructure in the world. Period. Every single winter sports destination is not only accessible by public transport, you can rely upon a sequence of connections to work seamlessly. So much so that you would think one company is responsible, but this feat of co-ordination is achieved across over 200 different transportation companies. In all my time in Switzerland, visiting all the resorts at this site, I have only once had a connection fail. If you are spending your hard-earned, limited time looking to enjoy winter sports, Swiss transportation will not let you down. Coupled with the relatively close proximity of major Swiss Alpine resorts, this gives rise to the almost unique opportunity that a winter sports holiday in Switzerland can easily take in multiple resorts, all from one base. For more information on getting around Switzerland go here.

The Swiss have four national languages, but they do not speak them nationally. In Romandie, the French-speaking part of Switzerland, or Ticino, the Italian-speaking part, German is not widely spoken, but English is. For the rest of the country most people speak German, but locally will speak one of a number of dialects of Swiss German or Romansch that are incomprehensible to Germans. If your English is better than your German, you are probably better off sticking to English. It is good to know a few words of dialect though, so where Schweizerdeutsch (Swiss German) is spoken, "Gr端tzi" is hello, "Merci" is thank you, "Adieu" is good-bye and "Sorry" works as well as "Entschuldigung". As you may notice, a lot of Swiss-specific German words, at least in formally spoken Swiss German, are of non-Germanic origin - usually French (e.g. Velo, Poulet, Billet).

Crime is low in Switzerland, but not unheard of. The only country in the world where I have been respectively robbed and broken in to, is Switzerland. Having said that I know of no safer country. Just remember that crime does exist, even if the Swiss will explain that it is only committed by people coming from abroad. The number for the police is 117, for the fire department is 118, for ambulance is 144 and for emergency helicopter services in the mountains is 1414. If in doubt call 112, the equivalent of 911 in the USA or 99 in the UK. Remember to have relevant insurance! Healthcare in Switzerland is the second most expensive in the world (although arguably the best).

It is easy to assume that Switzerland, lying at the heart of Europe, is typically European. In many ways it is, but in important ways it is not. It is part of the Schengen area, so you do not need to show a passport crossing the land borders (although it is recommended that you always carry your passport with you). However it is not part of the EU, so you can pick up duty-free goods on inward flights. The electric sockets are annoyingly and subtly different from those of the rest of mainland Europe, so you may need a specific Swiss plug adapter unless your plugs are designed for both Switzerland and the rest of Europe.

A winter holiday in Switzerland can easily circumvent skiing and snowboarding entirely! There are of course other winter sports, with summary details of Swiss resort facilities here and more details on individual resort pages. There are also a multitude of events - if you want to know what is going on in Switzerland this winter, go here.